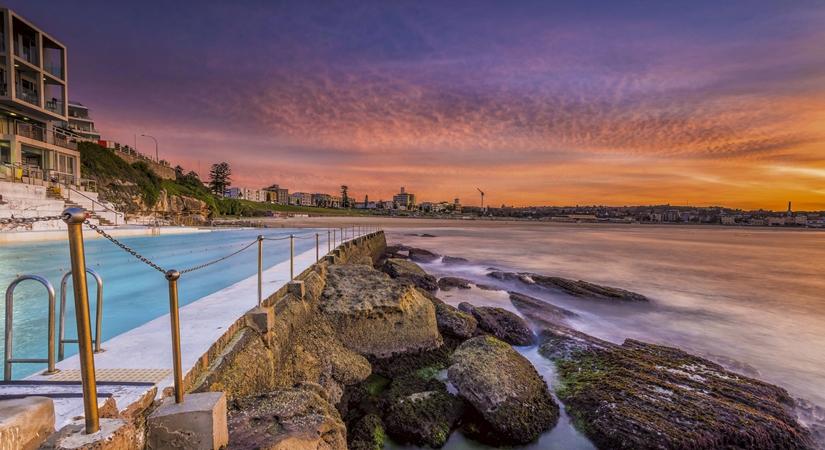 The goodness of an outdoor pool, built from seawater and just coming of a vast blue ocean, comes alive in New South Wales

May 22, 2020 (IANSlife) Dotting the beaituful Australian coastline, ocean pools or ocean baths allow one to experience the public seawater in a pool built out into the ocean or carved directly into the coastal rock. Often thought of as a mini-ocean within an ocean, these pools capture marine landscapic beauty at its best.

Ocean pools are quintessentially New South Wales (NSW), with just a handful found outside the State’s borders. There are about 100 along the NSW coast, from Yamba in the north to Bermagui in the south, with 35 in Sydney alone.

Ocean pools took off in the late 19th century. Competitive swimming was becoming popular and people wanted a place where they would be protected from the pounding surf and unpredictable currents. Many ocean pools were built by surf clubs or community groups and still hold a special place in the hearts of locals.

Yamba Rock Pool on the State’s far North Coast is built into the rocks at the sheltered southern end of the beach, near one of NSW’s oldest surf lifesaving clubs. Forster Ocean Baths opened in 1936 with a popular dance hall attached. They are now known colloquially as ‘the Bullring’ after a cafe that operated next to the pool in the 1970s.

Newcastle is home to the oldest ocean pool on the east coast of Australia, the Bogey Hole, which was hand carved by convicts in 1819. It also boasts the largest ocean pool in the southern hemisphere, the Merewether Baths. People come to swim laps, enjoy the beach or chat on the steps leading into the water, dubbed the Steps of Knowledge by locals.

Nearby, the Newcastle Ocean Baths are surrounded by a beautiful, heritage-listed art deco pavilion. The baths feature two ocean pools; the main rectangular pool has a separate area for lap swimming and the round shallow Canoe Pool is popular with families.

On the Central Coast, the Entrance Ocean Baths is a heritage-listed complex of three ocean pools. A children’s pool, 22m pool and full-length Olympic-size pool make these baths ideal for swimmers of all levels. You can also find smaller ocean pools at Pearl Beach and MacMasters Beach.

Illawarra and Wollongong
The Illawarra region, just south of Sydney, has a dozen rock pools, including Towradgi, Coledale, Austinmer and Bulli. One of the prettiest is at Coalcliff Beach, set against dramatic cliffs and the escarpment. Local legend has it that miners blasted the rock themselves using dynamite they snuck out of the mines in their pockets.

The Port Kembla Olympic Pool and the Continental Pool at North Wollongong are ocean-fed Olympic pools with facilities like changing rooms and showers. Both date back to the 1920s and 1930s, and are popular with lap swimmers and families.

Further south at Kiama, one can find two pools. The Blow Hole Point Rock Pool offers a safe swimming spot close to the area’s famous Blow Hole. Popular since the 1880s, it was cut into the surrounding rocks, giving it an irregular shape and natural charm. The Continental Rock Pool is 50m long and a smooth rectangle, perfect for lap swimming.

The southernmost pool in the State is the Blue Pool in Bermagui, named for the way it reflects a blue sky. A carved pool set into the rock face and continually washed with clean, clear ocean water, it’s home to thriving marine life, with fish, crabs and nudibranchs (marine snails) all coexisting happily with swimmers and snorkelers.