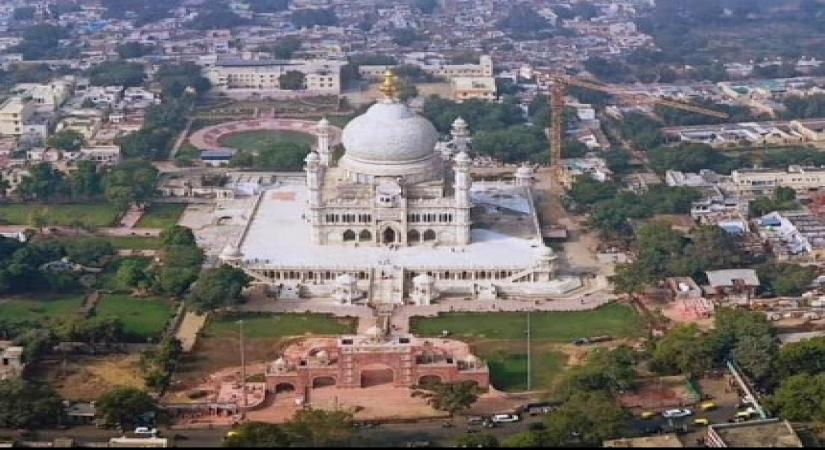 The city of Agra may be considered twice-blessed, it is the home of the Taj Mahal and a second reason and highlights the selfless love of millions of servers at Soami Bagh

March 7 (IANSlife) Situated 5 kilometres from the heart of the city of Agra, in the peaceful neighbourhood of Dayal Bagh, exists one of the lesser known treasures of the city. This splendid white Makrana marble edifice, is set amidst gulmohar trees and lush green lawns. The temple complex, which draws thousands of visitors both Indian and foreign, is commonly referred to as Soamibagh - or the "Garden of Radhasoami."

The construction of the Radhasoami Satsang Temple began in 1904 and was built with the help of donations from the followers of the encompassing religion preached by its founder Soami Shivdayal Singh. It is a religious organization founded by Shiv Dayal Singh in 1861 on Basant Panchami Day in Agra. It derives its name from the word ‘Radha’ meaning Soul and ‘Soami’ which refers to ‘One God.’

The Radhasoamis are considered in Punjab as an offshoot of Sikhism. What is interesting is that the Radhasoami is a religious fellowship that accepts saints and living gurus from anywhere – unlike the Sikhs who believe that after their 10 Gurus, there are no present day gurus.

The building of the Radhasoami Temple is what one would consider a true creation by dedication. Stone cutters have laboured for more than a hundred years on the building of this unique structure.

Generations of stone cutters and their families have been working on this edifice which is certainly one of the more important monuments in a city, is already full of unique structures, including the inimitable Taj Mahal.

The main structure of the building is over a hundred square feet in size, and has a wide colonnaded-verandah running on all four sides. The design encompasses architectural features of different classical styles in keeping with the secular traditions – a sect which makes no distinction of caste or creed, and accepts all into its fold.

Clearly recognizable in the design of the temple, are aspects of Jain, Muslim, Hindu and Christian architecture, brought together in a manner that is as spectacular as it is unique. Arches in different shapes and columns of different styles, blend harmoniously to create an architectural wonder.

The columns and arches are embellished with carved fruit and flowers, created with an eye to detail seldom seen in buildings of this day and age. Clusters of fruit and flowers impeccably carved out of white marble, positioned high up on marble columns, have trailing creepers and leaves, falling naturally over arches - each leaf perfect to the last curve. In these carvings, not only is the workmanship of the stone carver is exceptional but also the skill in superimposing the carved tendrils from the columns, over the arches like trailing vines on a wall.

Besides white marble, other shades of marble - green, pink, and black - have also been used in the building of the temple. The different colours, add variety and highlight some of the intricate carving on arches and pillars. The famous "pietra dura" work of Agra has been extensively used in the building of the structure, while the walls have intricate inlay work in floral designs as well as text highlighting the teachings of Guru Swami Shivdayal Singh. 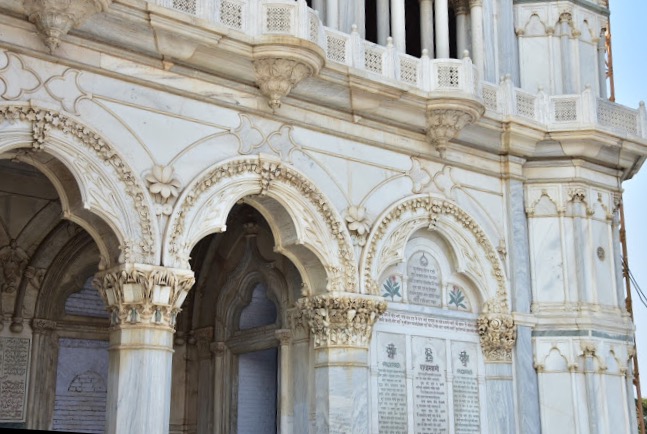 The Guru’s Samadhi is in the basement, 20 feet below the main hall. A dome in white marble has been created directly above it on the upper floor.

The creation of this edifice has involved the work of 4 or even more generations of marble carvers employed in the construction work – automatically taking over and continuing the work of their forefathers. Workers on the site are thus of all age groups and many have been trained in their skills from their fathers, on this very site. The common bond that holds them together is undoubtedly ‘their devotion to the faith’ and for all those who have toiled in creating this masterpiece, it has been and will always remain as ‘a labour of love’.

Soamibagh created with such love and devotion is a living example of the quality of craftsmanship that still exists in today's India. A creativity that has been honed to perfection by centuries of traditional skills passed down from father to son, since time immemorial. For even in its unfinished stage, the Radhasoami Temple is spectacular and visitors always marvel at the intricate designs and delicate shapes that are being created by the gnarled hands of the workers.

The work has been funded by donations from the followers of the Radhasoami faith. Funds have trickled in slowly and the work continued in a never-ending manner. All those involved, believe that purification of the soul comes with service. So though the Radhasoami Temple is now complete, the followers of the faith will no doubt continue to find other ways of practicing their selfless service. 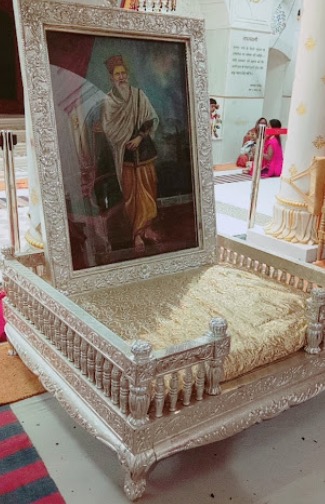 The city of Agra may be considered twice-blessed, firstly because it is the home of the Taj Mahal and embodies the immortal love of an Emperor for his Queen. Soami Bagh offers a second reason and highlights the selfless love of millions of servers, who were inspired to create such a magnificent monument to immortalise their Guru.