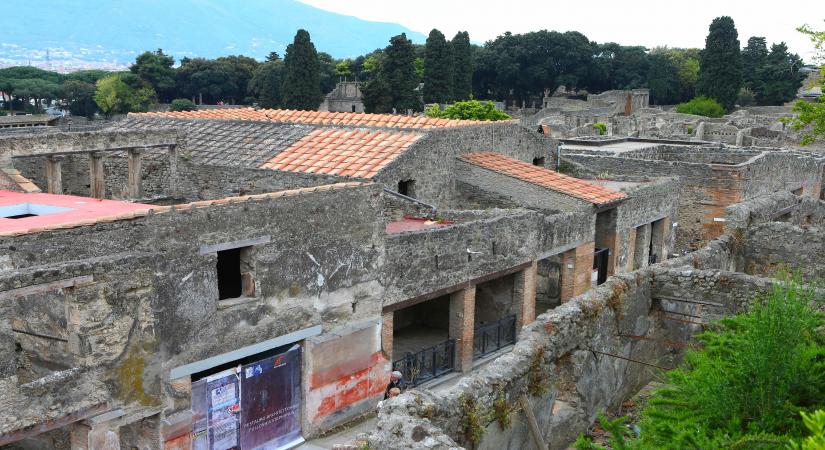 Rome, Aug 13 (IANS) Archaeologists working in the buried Roman city of Pompeii said they have uncovered a "sorcerer's treasure trove" of artefacts, including good-luck charms, mirrors and glass beads, the media reported.

Most of the items would have belonged to women, the BBC quoted Massimo Osanna, director of the Archaeological Park of Pompeii, as saying on Monday.

The trove was found in the House of the Garden in Region V of the archaeological park, the same area where an inscription was discovered last year, inside what remained of a wooden box. The wood itself had decomposed and only the bronze hinges remained, preserved by the volcanic material which hardened over it.

In it were crystals, ceramic, amethysts and amber. Scarabs (beetle-shaped amulets) from the Middle East were identified, along with various gems, including a carnelian with a craftsman figure and a glass bead engraved with the head of Dionysus, the Roman god of wine, fertility and ritual madness.

It was more likely the objects belonged to a servant or a slave, rather than the owner of the house, Osanna told the Italian news agency Ansa. None of the artefacts was made of gold, much favoured by the wealthy of Pompeii.

A room with the bodies of 10 victims, including women and children, was excavated in the same house, the BBC reported.

Archaeologists were now trying to establish kinship ties between the bodies found in the house via DNA analysis.

"Perhaps the precious box belonged to one of these victims," Osanna speculated.

The items in the box may have been worn during rituals as charms against bad luck, rather than as ornamentation, he said.

Pompeii was engulfed by a volcanic eruption from Mount Vesuvius in AD 79.

The fatal eruption froze the city and its residents in time, making it a rich source for archaeologists.

Most people in Pompeii were not killed by slow-moving molten lava, but by a vast cloud of hot gas and fragments, called a pyroclastic flow. The cloud surged over the city, killing its residents wherever they were, and burying them in ash, preserving their final moments.