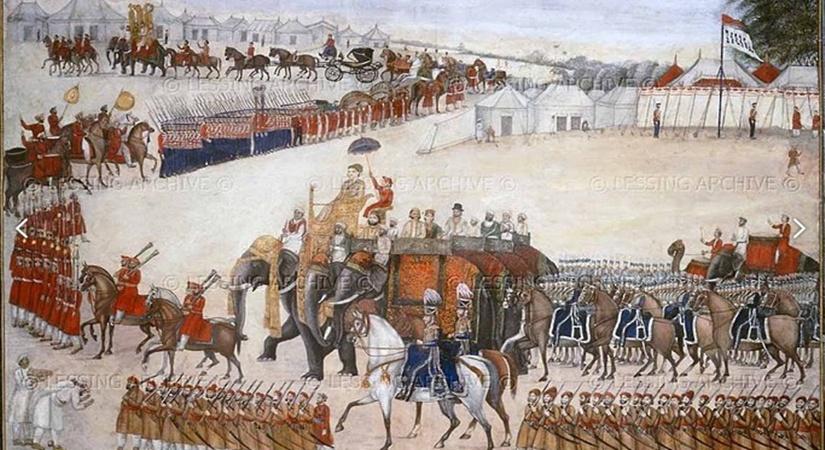 An air strip for landing of planes was especially built to ensure the rulers of Gwalior, Dholpur and Patiala, could arrive in their private jets – their last visit became became the last great celebration witnessed by Rampur, before it merged with India

February 6, 2020 (IANSlife) Rampur in Uttar Pradesh is the only other place, apart from Delhi’s Rajghat, where Mahatma Gandhi’s ashes are preserved at a very special Samadhi.

What makes Rampur different is that this district has the highest Muslim population in Uttar Pradesh and more importantly, has never had a major Hindu-Muslim riot. Secondly, it was also the first princely state to accede to the Indian union. Rampur State’s first parliamentary representative was freedom fighter Maulana Abul Kalam Azad, who in October 1947 urged Muslims at Delhi’s Jama Masjid to “pledge that this country is ours, we belong to it and any fundamental decisions about its destiny will remain incomplete without our consent”.

Culturally, Rampur has much to be proud of. Nawab, Kalve Ali Khan, is known for initiating Rampur’s celebrated connection with music. Literate in Arabic and Persian, his dream of setting up a Darbar that could match the brilliance of the pre-1857 Oudh Court, was achieved by his son Nawab Hamid Ali Khan.

Rampur added to the country’s cultural heritage by gifting India with its own Hindustani classical style of music, with the Rampur Seheswan Gharana. Also, some of India’s greatest musicians are known to have practised their art at Rampur, including tabla player Ahmad Jan Thirakwa, sarangi player Bundu Khan, sarod player Fida Hussein Khan, and Kathak dancers Acchan Maharaj and Kalka Prasad. The Nawab’s own guru, Wazir Khan, a member of the family of Tansen, was treated with great respect and given a seat next to the Nawab’s throne.

Under Nawab Hamid Ali Khan’s rule, the state’s standards of education received a boost. A Member of Council during the Viceroyalty of Lord John Lawrence, he was knighted in Agra by the Prince of Wales.  The Jama Masjid in Rampur was built by him at a cost of Rs. 300,000. Ali Khan ruled successfully for 22 years and 7 months. After his death his son Mushtaq Ali Khan took over and appointed W. C. Wright, as the Chief Engineer of the state and built many new buildings and canals.  He was succeeded by Nawab Hamid Ali in 1889 at the age of 14, whose rule saw considerable growth in education. Many new schools were opened during his reign, and donations were provided to colleges – the Lucknow Medical College for instance received Rs. 50,000.

In 1905 Nawab Hamid Ali, built a magnificent Darbar Hall within the Fort, which now houses the famous collection of Oriental manuscripts held by the Rampur Raza Library. Raza, was himself a poet and an artist who composed Hindi poetry and played the khartal (a percussion instrument). He is remembered for performances for his family members on many occasions. Raza is known to have given the famous ghazal singer Akhtaribai Faizabadi the title of Begum – a title that she was known by thereafter.

The royal palace ‘Khas Bagh’, built in stages and completed in 1930, is a strange amalgam of Mughal and British architectural styles. It was the first palace in India to install an air-conditioning unit, but is now in a sad state. The Palace’s wood panelling, chandeliers, carpets and the many portraits of Nawabs, are uncared for.  It has been said that the kitchen was a very important place in those early days, with visits by royalty from other states. The Rampur kitchen was known for its specialized cooks – one who could make two types of rice dishes in a single handi, while another was an expert in ‘Shab deg’.

It has also been said that Rampuri Cuisine has imbibed many influences from other cuisines – perhaps even more than the Lucknowi Cuisine.  In addition to Mughlai, there were the cuisines from Afghan, Lucknow and Kashmir dishes that the khansamas were exposed to.  These influences have now become part of the Rampuri tradition. It is interesting to know  that it was the Rampur cuisine that introduced the use of papaya and bottle gourd as mutton tenderizers. Use of ‘varq’ (silver foil) on food was also their invention and used liberally to dress up their famous halwas. Rampur cuisine also continues to use clay pots for cooking many of their dishes. Onion in different forms was the essential base of each dish that was made - such as raw onion paste, golden and browned onion.

An air strip for landing of planes was especially built to ensure the rulers of Gwalior, Dholpur and Patiala, could arrive in their private jets – their last visit became became the last great celebration witnessed by Rampur, before it merged with India. It is said that Raza did not sign the merger agreement under duress and also graciously gave up some of his most precious possessions such as his collection of books.

The Rampur Raza Library is housed in Hamid Manzil, a European-style mansion of Italian marble and gold-plated walls, located in the heart of the town. It stores 2,500 specimens of Islamic calligraphy, 5,000 miniature paintings, 17,000 manuscripts, and 60,000 printed books. The collection includes a seventh century Quran written on parchment and ascribed to Prophet Muhammad’s son-in-law, Hazrat Ali. Another rare book is a Persian translation of Valmiki’s Ramayana – said to be Aurangzeb’s personal copy.

On 1st July 1949 the State of Rampur was merged into the Republic of India. Rampur today presents a slightly decayed appearance: the palaces of the Nawabs are crumbling, as are the gates and walls of the fort. However, the Library remains a flourishing institution of immense value to scholars from all over the world.