Krishnanagar, the land of mesmerising clay toys and figurines 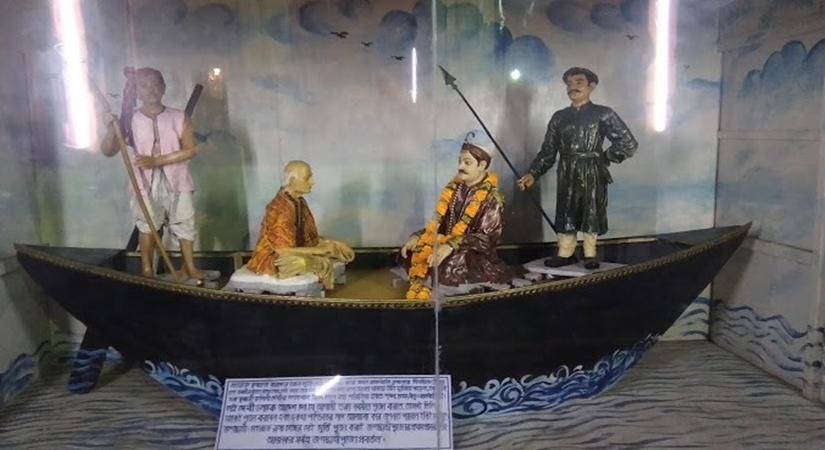 Among all the festivals, the grandest puja celebrated in Krishnanagar, is probably the Jagaddhatri Puja – this is a puja in which Goddess Durga is worshipped in another incarnation known as ‘Jagaddhatri’

February 20, 2020 (IANSlife) My earliest visit to Krishnanagar was probably when I was 6 years old and all I can recollect about the visit is about a clay toy-maker and his wife (or perhaps his daughter painting tiny figures of all sorts of animals – tigers, cows, cats, deer and horses. But what caught my eye was the clay figure of a farmer and his bullock cart as well as women grinding wheat.  I later found out that at that time, the city was famous for the clay painted dolls and animals that were sold in little boxes at the railway stations. Visitors seldom left the city without buying at least one box of these figurines for their families. It is said that this craft began in Krishnanagar almost 300 years ago and ever since, the city has been famous for modelling - not just toys but images of gods and goddesses.

It is said that the city was named after Krishnachandra(1728-1782) who acceded to the title of Maharaja of the Nadia District in 1728.  But there is another theory that says Krishnachandra named it after Lord Krishna, whom he worshipped. He established his capital at Krishnanagar which was originally known as the village of ‘Reui’.

Krishna Chandra was determined to improve the skill of the city modellers and searched for skilled sculptors from other cities, to create better images of gods and goddesses and other religious figures for temples and community pujas.

The Rajbari (Royal Palace) is a splendid palace but the years have taken their toll and it has lost much of its past glory. Its partially dilapidated structure continues to have some of the exquisite carving on its inner walls. Raja Krishnachandra is credited with popularising the ‘Durgotsav’ (Durga Puja Festival) and continues to be celebrated annually with great pomp. The Durga image that is worshipped every year at the Rajbari is a 15 ft tall image known as ‘Rajrajesvari’ (the Empress), made in traditional style and is immersed in a nearby pond.

Among all the festivals, the grandest puja celebrated in Krishnanagar, is probably the Jagaddhatri Puja – this is a puja in which Goddess Durga is worshipped in another incarnation known as ‘Jagaddhatri’. The whole city is full of lights during this festival, that makes the nights as bright as day. 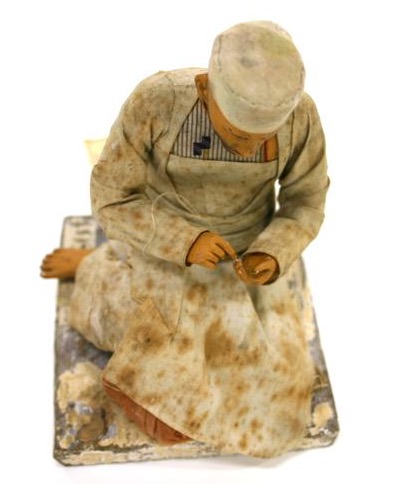 The Krishnanagar figures that are made here, are created by modelling coils of clay over a metal frame, clay is then mixed with cotton wool for the more detailed, finer features of the model. The figures are sun-dried and any cracks that appear are filled with paper and tamarind seed or glue. The figures are then painted in natural colours and their hair is made either of sheep's wool or jute. Similar techniques continue to be used today to create life-size portraits.

The second half of the 19th century and early 20th century was when Krishnanagar’s modellers became famous. The better known names at the time were Jadunath Pal (1821-1920), Ramlal Pal, Bakkeswar Pal (1875-1924), Rakhaldas Pal and Candrabhushan Pal Mukharji (1888).  Jadunath Pal’s group of figures made for the Victoria Museum’s collection, received an order of merit at the Melbourne International Exhibition in 1880.

The fame of the sculptors of Krishnanagar, spread far and wide.  So much so that, figures created by Krishnanagar modellers were considered good enough for museums and exhibited  in galleries around the world. Their figures are so detailed and lifelike that they appear as though they might have been modelled on real people. For instance a number of life-size portraits have been made and are on display at the Peabody Essex Museum, at Salem, Massachusset. 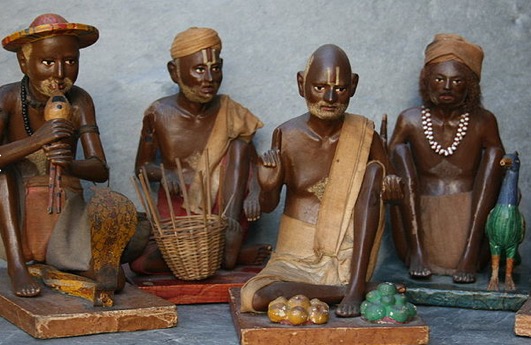 The remarkable realism that these modellers are able to bring into their work, was recognised when skilled craftsmen were commissioned to work on the complex model of an Indigo Factory, created for the 1886 Colonial and India Exhibition - now part of Kew’s Royal Botanic Gardens collection.

Collectively, these modellers were commissioned to create a variety of models for exhibition and sale. These models were shown and awarded prizes at most of the International Exhibitions after 1851.

Throughout the late 19th and early 20th centuries, several Krishnanagar modellers attended exhibitions, creating models and other items on request. It is said that in 1924, during an exhibition in London the Duke of Connaught was so impressed by the life-like appearance of the models, he requested an Indian sculptor to make his portrait. The sculptor readily agreed and the Duke was totally amazed when the sculptor managed to create a life-like image of the Duke in a very short time.

Krishnanagar has been an important centre for culture and literature. There is also a strong tradition of drama and acting. Besides the modelling of images, there are several types of handicrafts made here. These include rugs, bamboo and jute crafts and miniature paintings.