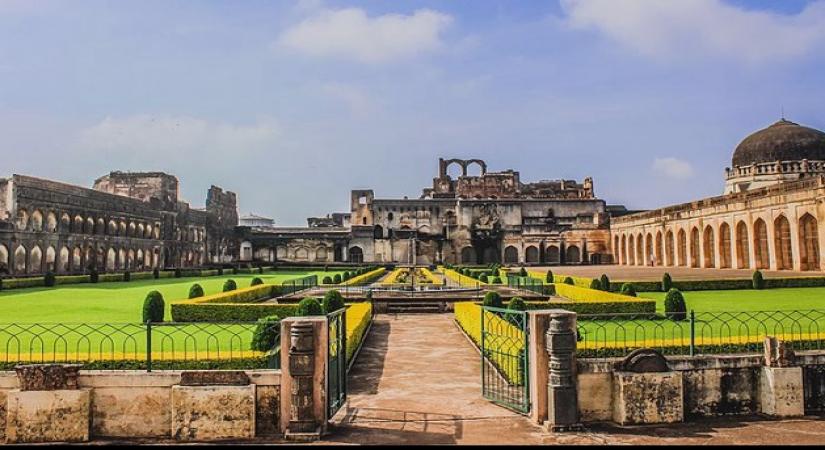 February 22, 2020 (IANSlife) An important city at the time, Bidar was the capital of the Bahmani Kingdom, which now falls within the state of Karnataka. The Bidar fort was built by Ahmad Shah Wali Bahman with beautiful mosques, madrasas and gardens. It was captured in 1321-22 AD by Prince Ulugh Khan of the Tughlaq Dynasty who later became Sultan Muhammad bin Tughlaq of Delhi. The exact layout of the old fort, with its double lines of fortifications, has all but disappeared.

The ancient art of Bidri, the craft of silver inlay on an alloy of metals is somewhat hard to find these days. It was never clearly documented, however what we are sure of is that the craft was named after Bidar, the city of its origin.

The Bidri technique was brought into India in the latter part of the 15th century by the Moghuls and it is said that two master craftsmen from Iran came to India and were invited by the Bahmani monarch, to settle in Bidar. An astute monarch with an eye for aesthetics, he had recognised the potential of the craft and gave the Iranians all the help that they needed to ply their trade.

Though the technique of inlaid metal work came from Iran, the craft in its traditional form is now practiced only in India. An alloy of metals, predominantly zinc, is cast into various shapes. The surface of the item is darkened with a coating of copper sulphate and designs are engraved on it. Since the engraved portion is lighter in colour than the rest of the surface, the designs are clearly visible for the inlay work. In earlier days, the inlay was usually silver and for royal patrons, gold was also used. These days brass is being used quite affectively.

After the inlay work is complete, the designs are smoothened with a file and burnished. The final stage is to blacken the surface of the item with a paste of ammonium chloride, sodium chloride, copper sulphate, potassium nitrate and mud. This darkens the surface without having any adverse effect on the inlay. The paste is then washed off and oil applied to the entire surface to give it a sheen. 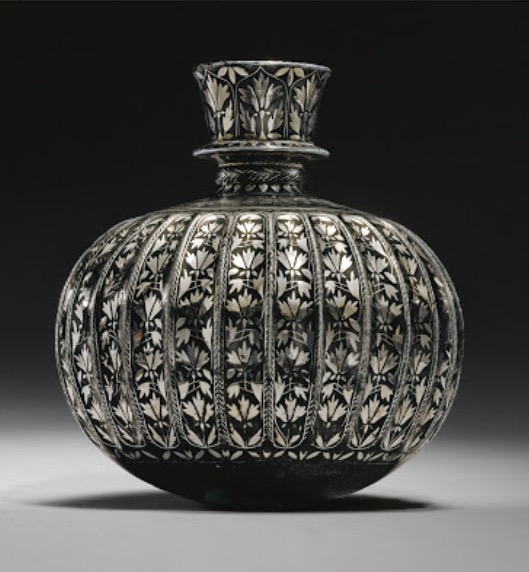 Royal patronage helped the craftsmen to create exquisite pieces that became famous all over ‘Hindostan’. In the process two of their assistants also became well-versed in this intricate craft. These two Bidar locals Sajjad Quadri and Ramanna Master, trained by the Iranians are said to have pioneered the craft in India and the workshops set up by them, paved the way for many more. In subsequent years, the craft spread to Aurangabad, Hyderabad and even eastward to Purnea in Bihar.

What is very interesting is that the ancient plaster of the Fort of Bidar is said to be the best medium to achieve the distinctive matt black on all bidri items. Artisans were known to collect scrapings of the Bidar Fort walls for their trade. This may have been one of the reasons for the damaged walls at the Fort – which is now safely under ASI and the fort’s conservation is well under control. So much so that the Fort of Bidar is considered one of the best kept heritage structures in the region.

During a visit to Bidar, I happened to meet one of the well know Bidri makers. On being asked what impelled him to enter this particular trade, he smiled and said, “My fascination with Bidri began when I was very young and would run away from school and spend hours watching the deft bidri craftsmen create ‘magical’ huqqa bases and vases.”

By the time he was twelve, Abdul already knew all the intricacies of the craft and persuaded his father to allow him to join’ Gulzar Deccan’, the most prestigious Bidri workshop in Bidar.  His talent was recognised and soon he was appointed chief designer. Under his guidance many new designs and shapes were created. He and his sons now have a factory of their own in Aurangabad and are continuing their work in the best possible way that they can. He says, “There is always a demand for fine work, but marketing is our stumbling block. If craftsmen have to run around trying to sell, how will they have time for making quality products?”