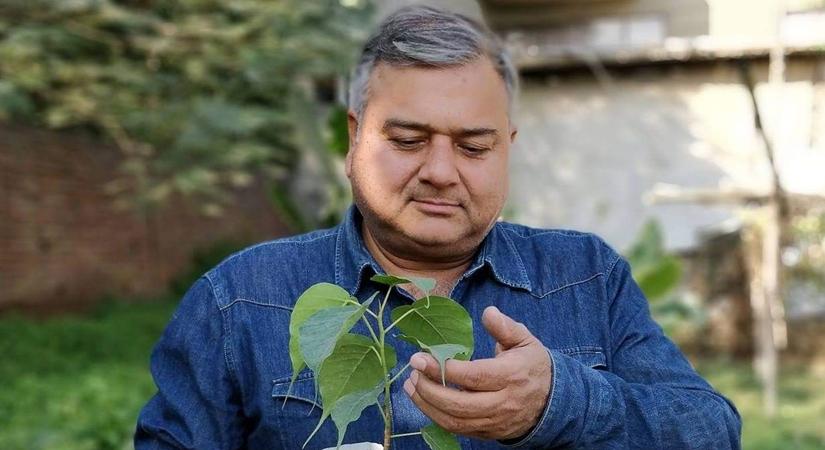 Photosynthesis is important for pollution free environment, he says

November 19, 2020 (IANSlife) Noted environmentalist Swami Prem Parivartan, famously known as Peepal Baba, who is said to have planted and conserved over 1.25 crore Peepal trees, says that if we truly want to get rid of the pollution, then we need a "greenery revolution" and drastically increase green spaces.

Winters in Delhi have grown to be a time of stubble burning and choking pollution due to cracker bursting. As a response to the region-wide problem, schemes like odd-even in the past and this year, the 'Red Light On, Engine Off' campaign become popular.

Before Diwali, while the government had ordered a ban on bursting fire crackers, many Delhi-NCR-residents noted the ban has been flouted and reported continued cracker-bursting on Diwali night.

During Covid-19, Peepal Baba planted many trees and provided proper water and natural fertilisers. His organization Give Me Trees Trust is a large voluntary tree-planting collective working in villages, along highways, ponds, rivers, mountain forest fringes, wetlands, wastelands and farmlands.

Speaking about why winters are not as cold as they used to be in past, the eco-warrior said, "It is mainly because of the green spaces which is decreasing day by day and because to decreasing leaf count the carbon level is increasing rapidly."

"The other reason of increasing temperature is because the rains pattern has changed in past few years. If we take the example to Delhi NCR, it has lost its rain in past few years. After 2014, Delhi NCR only gets 7-8 times rain in a year which used to be around 100 times per year. The process of photosynthesis which plays important part in rain and with the decreasing leaf count this process is affected badly. Apart from trees water also helps in absorption of carbon from the environment. Delhi used to have thousands of lakes but now only 3,000 lakes are left which not enough of absorb the carbon present in the environment. We need to re-generate those dead rivers by planting trees around them and in 2-3 years we can see the positive result," he said.

Adding, "If we really want to fix the issue of rain and then we have to increase the green spaces at huge scale. If we don’t realise the seriousness of this issue now, then it would be too late for use to fix it. If we pass year 2026-2027 than we will not able to fix the issue."

According to the environmentalist, only two kinds of people will survive in the future -- one, who have land and two, who lives near water (lakes and rivers).

"If you have the land and you know how to use it properly you can make good profit from it. People with land can do organic farming and agriculture to increase green spaces. Give Me Trees' ultimate aim is to increase the leaf count in the environment by any means whether you plant a Peepal trees in the forest or you plant a money plant in your house it will contribute into the environment."