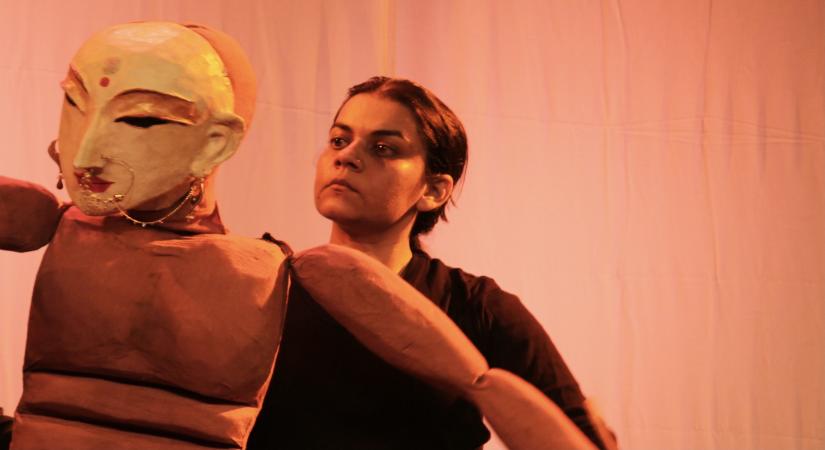 "Creating for children far more challenging than it is more adults"

September 24, 2020 (IANSlife) Lamenting that many assume puppetry as simple and for frivolous consumption, and that there seems to be a general assumption that so are children, puppeteer Anurupa Roy stresses that  it is important to note that that children are a serious audience and creating for them is far more challenging than it is for adults.

Roy’s group Katkatha, which recently premiered its first fully online show, ‘Teelapur ka Rakshsha’, a co-production with Helos Theatre, Hamm in Germany and was recently part of talk series organised by Kolkata Centre for Creativity insists that while adults can be impressed with performance devices, special effects or skills or world play, children are not stupid enough to fall for them. “Children watch performances seriously, with no other expectation than of authentic engagement. They may not demand their money back when they don't receive it, but they switch off and go away into their own world. Similarly, puppet theatre is a complex art form with multiple layers of engagement with its audience. At one level, the simpler one -- it is about skills and technique, at another it is about aesthetic. However, there is another layer --- of the suspension of disbelief, where the audience sees dead material, knows it is dead material but ’believes’ that it laughed or cried or was breathing.”

For someone, who started playing with puppets when she was not even 10-years-old, she considers herself lucky to be allowed to do what she wanted to in childhood and also make choices in early adulthood, by her parents. “I acknowledge everyday that this is a privilege that many others don't have, that of empathetic and understanding adults in childhood,” says Roy, recipient of the Ustad Bismillah Khan Yuva Puraskar in Puppetry (2006).

Adding that the journey of Katkatha has been about discovering who they are and what they want to say as artists, Roy, who has been a visiting faculty at the University of California Los Angeles and Artist in Residence at Pro Helvetia Swiss Arts Council asserts that collaborations, exchanges, playing and  failing has been a very big part of their learning process. “Children, youth and communities have been important to us and have taught us continuously. Katkatha is about the people who have been working together and the skills they bring to the table, the stories we want to tell together and our love for puppet theatre and its possibilities.”

Bringing forth stories that respond to what is happening around, she feels that the government is just not doing enough for the art form. “All they need to do is execute what already exists in culture policy --- but with more integrity, and not as if they are doing the artists a favour,” says Roy, who studied puppetry in Sweden and Italy.

Adding that there is a general apathy towards culture and the severe budget cuts in education and culture by the government affects everybody down the line, Roy, who's  next project ‘The Arabian Nights’  will premier next year  says, “ Since puppet theatre is a fringe art form, it suffers even more. I don't agree that there is no demand for it. Katkatha is an example of the opposite being true. It's the lack of opportunities for audiences to engage with the performing arts whether it's school children watching performances, including puppetry, or  the huge cost of hiring theatre spaces to organise shows. How can the arts community do these without government and corporate support?”