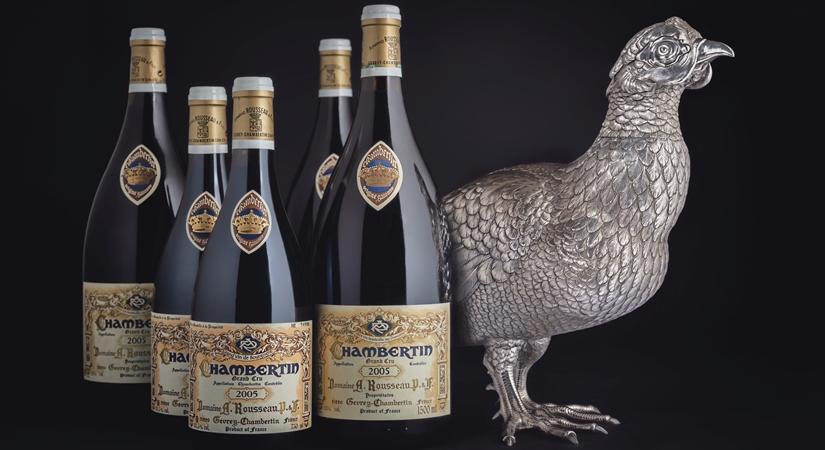 April 5, 2020 (IANSlife) You might have been building a collection of vintages over the years and saving it for a special occasion… well there’s no better time to sit back and sip on some of the good stuff, even if it’s all by yourself.

Christie’s wine specialist Charlie Foley decants a bottle of old Burgundy with a Fabergé decanter; while sharing some tips and tricks. Read on…

Decanting wine is a theatrical procedure that adds drama to even the simplest of dinners. An entire culture of equipment, techniques and tricks has grown up around the theatre of decanting. The purpose of decanting is threefold; to aerate a wine, to remove sediment, and to add a sense of drama to a dinner-party.

Tannin is the fine mesh in a red wine that gives it structure. Aerating the wine is similar to shaking a crumpled blanket or a throw on a bed. The air smooths the creases and crinkles so that the tannin appears plump and rounded. Here are eight tricks to enable you to become a master of this dramatic art.

Young, heavier reds benefit from a period of aeration so that the wines can open up and show at their very best, with vibrant fruit and fine-grained tannins. Varieties such as Cabernet-Sauvignon, Syrah, Zinfandel, Malbec, Nebbiolo and Tempranillo should be opened 2 hours before serving and decanted.

Lighter styles of red such as Pinot Noir, Sangiovese, Grenache and Gamay can have their corks drawn an hour or so before serving.
Older red wines may not benefit from prolonged exposure, and the major aim with such wines is to separate the liquid from the sediment. Thirty minutes before dinner is the best time, in the calm before the storm. This will also allow you time to check the quality of the wine and replace it with another bottle if the wine has sadly shuffled off its mortal coil.

I would personally shudder at the sight of a sparkling wine decanted, unless it is old vintages of oxidative champagne such as Selosse or Henri Giraud, as the bubbles dissipate so quickly. However, I have served at dinners for a Middle-Eastern Prince who hated the sight of bottles and so had all his champagne decanted into gold-leafed decanters.

Standing a wine up the day before serving is an excellent way to let the sediment settle to the bottom of the bottle. Keeping it in the cellar and then moving it to the dining room for decanting is the best way to make sure the wine does not gently cook itself and you are not decanting a faulty wine from the off-set.

A waiter’s friend is the most useful kitchen tool I know and will work perfectly with most young wines with strong corks. Getting the tip in the centre of the cork and using your index finger to guide down the shaft is the best method. Using the T-bar in the palm of your hand to force the screw in. Drawing the cork out results in the best sound in the world of wine, a satisfying pop.

Older vintages will require more technical corkscrews, as the corks are less durable and tend to crumble. An ‘Ah-so’ is a beautiful two-pronged instrument that is inserted down the sides of the cork and the neck of the bottle. You should lead with the longer prong and wiggle it in into the space between the cork and bottle until the shorter prong follows on the opposite side. Once the peg is level with the top of the bottle, you should twist and pull to remove a full cork and thus avoiding the horror of cork floating in your bottle.

Beyond the ‘Ah-so’ is the Durand; the connoisseurs corkscrew. It is a combination screw and Ah-so instrument and should be used for the oldest vintages where, with care, it is the most failsafe way of removing a full, if slightly saturated cork.  Durands can also be used on large format bottles such as jeroboam and beyond. A large format wine cradle is the best option for drawing corks on huge bottles, but unless you are able to use it as an instrument of torture when not decanting wine, it is a large piece of equipment to cram into your dining room.

It’s all in the bowl

Choosing your decanter is an aesthetic and practical choice. I am honoured to be able to decant this wonderful old vintage of La Tâche from Domaine de la Romanée-Conti into the belly of a beautiful silver pheasant decanter from the famed workshop of the Russian designer Faberge.

It adds drama and excitement to the serving of this wine, and as theatre is one of the main aims of decanting, I can think of no better vessel for a fine vintage French wine. The key with a decanter is to be able to swirl the wine and therefore a wide bowl is important. A narrow neck is also essential to funnel the liquid into the glass and avoid spraying a table cloth.

Bring out your muslin

The decanter should be covered by something that will catch sediment. Muslin, cheese-cloth or a fine sieve will be perfect. Depending on the amount you end up drinking, you can ask your guests to do the Rorschach test with the stains left on the muslin.

Port traditionally throws a large sediment and historically corks could be quite saturated. Some clever, if dramatic soul, thus invented port tongs. The tongs are heated over a flame and applied to the bottle neck before a cold cloth is compressed over the same spot. The temperature change induces a snap and the top of the bottle with the cork inside comes clean away. This can then be dipped in wax and kept as a memento. The bottle is then decanted through muslin in the same manner as red wine. It isn’t just country vicars tonging ports either, Eleven Madison Park and other notable restaurants now add this special piece of vinous theatre to a dinner when port is ordered.

Double-decanting is a common feature of banquets and large dinners when not enough decanters can be found and the waiter may end up drippling exquisite Claret down your best bib and tucker if they cannot hold a decanter properly. The bottle is decanted in the usual way and then washed out with cold water, drip-dried and then refilled with a funnel. The sediment is out of the wine and the added benefit is that the guests can still see the label. Christie’s Instagram guru’s love us to serve wine this way, as a decanter, unless it’s a silver Faberge pheasant, is not as pretty as the bottle.

IANSlife can be contacted at ianslife@ians.