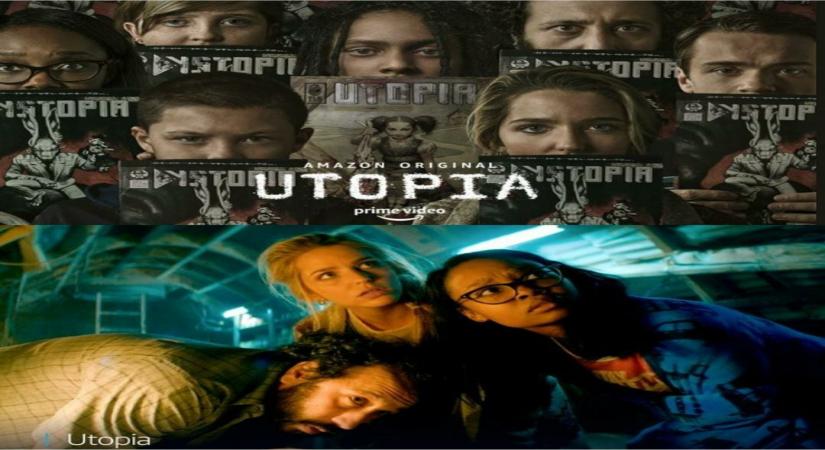 A cult graphic novel seems to hold clues about viruses and other catastrophes that threaten to annihilate humankind. Fancy that as an eerie dose of entertainment in the time of pandemic.

Gone Girl author Gillian Flynn writes and executive-produces eight episodes of the nihilistic action drama Utopia, based on the cult British conspiracy thriller series of the same name that launched in 2013. While the core of the original is retained, this new American recreation is predictably more formulaic in its bid to connect with a wider audience.

A woman cleaning her late grandfather's house finds the hand-drawn draft of a graphic novel. The pages, it turns out, are an unpublished manuscript of Utopia, a sequel to a bestseller named Dystopia that was published six years ago, but the author strangely never released a follow-up. Knowing that Dystopia has a fiercely loyal fan following, she decides to auction the manuscript to the highest bidder.

The story then follows four Dystopia fans who have never met but have stayed in touch online just to bond over their favourite graphic novel. Upon hearing the sequel to Dystopia is up for sale, Sam (Jessica Rothe), Ian (Dan Byrd), Becky (Ashleigh LaThrop), and Wilson (Desmin Borges) decide to meet and pitch in with money to buy the book.

For the quartet, buying Utopia is important because they seem convinced that clues to global calamities such as Ebola, SARS and MERS were hidden in the artwork of Dystopia. They believe Utopia might have hints about possible horrors to come, as well as pointers on how to deal with them.

They soon realise there are many others like them who are after the manuscript, and many of them will stop at nothing.

The series unfolds with lots of violence often bordering on gore (there is at least one gruesome sequence in each episode), though it does not always have a thriller impact. Gillian Flynn goes lower on black humour than the original British series, which is not of much help considering the overall storytelling is not always engaging.

Utopia would seem interesting in these times of Covid because the show talks of a virus that spreads through the air, of hotspots, lockdowns and quarantine, and mixes these with the plot of fan frenzy that a graphic novel might generate. The Covid parallels in the story are only too stark. The show's big star attraction John Cusack as Dr. Kevin Christie develops a protein that some of the young victims had, and virologist Michael Stearns (Rainn Wilson) realises these young victims display symptoms that were spotted years before in Peru.

Yet, Flynn never really goes anywhere with such an interesting premise beyond using it for heightened, sporadic violence. Every time a plot point begins to seem interesting, the narrative loses and the impact gets diluted.

Of the cast, John Cusack lends some Hollywood glitter while Ashleigh LaThrop's Becky is well performed. Sasha Lane has a defining role as the antagonist Jessica Hyde, though for better effect the character needed to be fleshed out better.

From rom-com (The Mindy Project) to thriller (Gone Girl, Sharp Objects) to action (Widows), projects bearing the Gillian Flynn signature have always had nuanced storytelling and characterisation. Utopia could seem like an anomaly. Watch the show for a reminder of what we are living through, if you must.

(Vinayak Chakravorty can be reached at vinayak.c@ians.in)