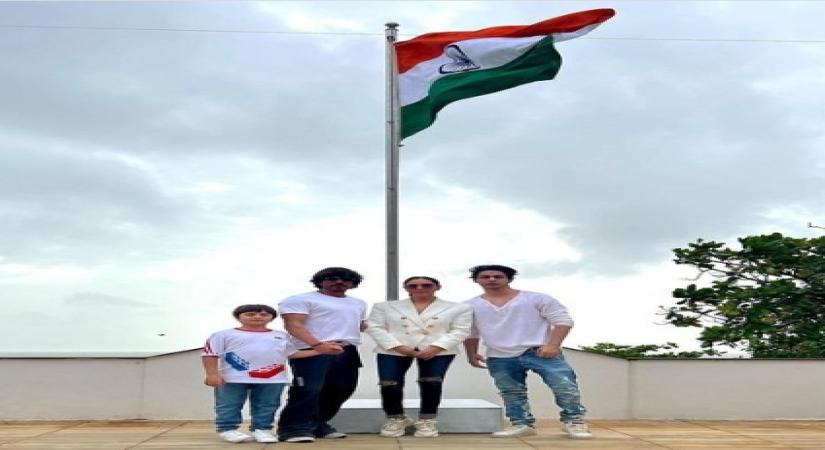 SRK has three huge releases in the pipeline

Mumbai, Aug 14 (IANS) As the country prepares for its 75th Independence Day, Bollywood superstar Shah Rukh Khan, joined by his family, hoisted the Tricolour at his residence here on Sunday. It was an expression of his support for the nationwide 'Har Ghar Tiranga' campaign.

It is an initiative of the central government to get all Indians to be a part of the 'Azadi Ka Amrit Mahotsav' and encouraging people to hoist the national flag in their homes from August 13 to 15.

SRK, dressed in blue pants and a white casual T-shirt, took to Instagram to share a video from his home, Mannat, in the Bandra area of Mumbai. The video shows SRK's youngest son AbRam hoisting the flag. Also present were SRK's elder son, Aryan, and wife Gauri.

He wrote in the caption: "Teaching the young ones at home the essence and the sacrifices of our Freedom Fighters for our country India will still take a few more sittings. But getting the flag hoisted by the little one made us all FEEL the pride, love and happiness instantly."

Meanwhile, on the work front, SRK has three huge releases in the pipeline -- 'Pathan', where he will play a spy. The film is produced by YRF and also stars Deepika Padukone and John Abraham, it's a part of the YRF spy universe where Salman Khan will also be making a cameo appearance.

There's also 'Jawan', helmed by Tamil director Atlee, and Rajkumar Hirani's 'Dunki', where SRK will be sharing the screen with Taapsee Pannu, who is awaiting the release of Anurag Kashyap's 'Dobaaraa' featuring her.