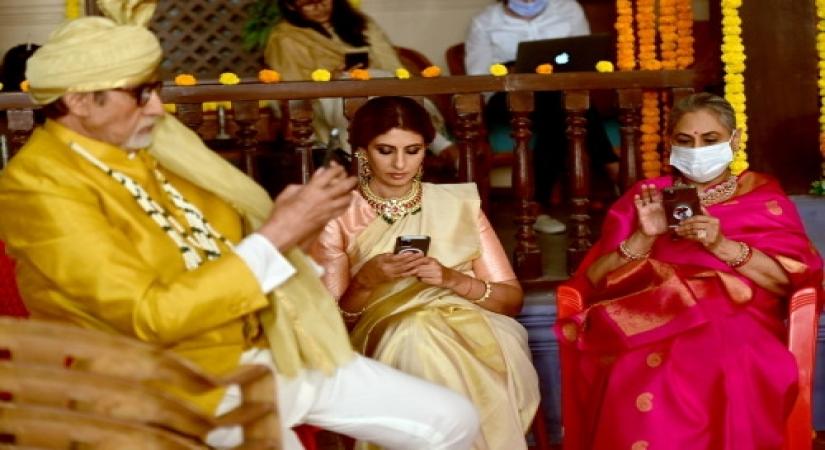 Mumbai, Nov 25 (IANS) Amitabh Bachchan has shared several candid shots of shooting with wife Jaya Bachchan and daughter Shweta, saying that working together with his family brings a sense of camaraderie.

Big B has captured the moments from the shoot on his social media. In the pictures, the trio looks elegant in ethinic wear. The pictures also give a glimpse of the precautions they are taking on set amid the ongoing pandemic.

In one image, Big B is seen in a yellow kurta and beige turban, smiling for the camera as he captures Jaya, who is in a dark pink sari, and Shweta in a beige sari. In another image, he is seen in a white kurta, and Jaya in a green sari while Shweta is seen in a cream coloured suit. They are seen wearing masks during breaks.

Big B wrote on Twitter was: "family at work."

"The family works together .. and there is a sense of togetherness and camaraderie .. and sharing and suggesting and .. well just being there ..… in the thoughts of those  .. that suffer from pain and loss ... but work goes on and in the interim .. there is still uniformity," he wrote on his official blog while sharing the pictures.

The actor will also star with Deepika Padukone and Telugu superstar Prabhas in a multilingual mega production for the big screen.