Strong results for Christie’s in 2021 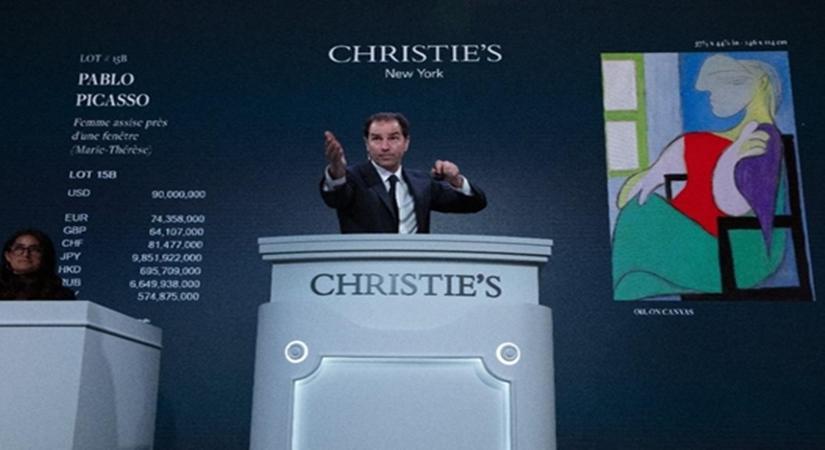 January 7, 2022 (IANSlife) Guillaume Cerutti, Christie’s Chief Executive Officer, commented,"We are pleased with our 2021 achievements. Beyond our auction and private sales results, which are exceptional, Christie’s has also made a breakthrough in new sales formats and categories, NFTS in particular. They have allowed us to showcase works by new, emerging, and under-represented artists and to reach out to a new audience of younger clients. We have also made great progress on other priorities, with important investments in Asia and with our commitments to becoming carbon net zero by 2030 and to building and sustaining a more equitable and diverse profile for our company. Growth, innovation, and responsibility remain at the forefront of our objectives for 2022. "

Christie’s offered the top two most valuable artworks sold at auction in 2021: Pablo Picasso’s monumental masterpiece Femme assise près d’une fenêtre for $103.4 million and Basquiat’s In This Case for $93.1 million, both highlights of Christie’s inaugural 20/21 category sales in New York this May.

In November, the Cox Collection, one of the greatest privately held collections of Impressionist art to be offered at auction, featuring three works by Van Gogh from the end of the artist’s lifetime, was 100% sold for $332,031,500. The J. Paul Getty Museum in Los Angeles purchased Gustave Caillebotte’s Jeune homme à sa fenêtre from the Cox Collection for $53 million, the highest value work bought by a museum at auction this year.

In 2021, Christie’s launched the world’s NFT market at auction and has helped to propel this new category into a powerful force for the future of the global market. Christie’s contemporary art 2021 sale total included 8% of NFT sales.

Sales of the more than 100 NFTs sold by Christie’s in 2021 attracted new and younger collectors, 74% of whom were new buyers to Christie’s; Christie’s first NFT sale in London took place in October; and in November

Partnerships with the Andy Warhol Foundation for the Visual Arts, Gucci, and collectibles behemoth Superplastic are among the NFT's other highlights.The first-ever NFT sale in Asia, hosted by Christie’s in its No Time Like the Present online auction,

The first-ever on-chain NFT auction, curated by Christie’s and hosted by OpenSea, achieved $3.5 million in December.

Luxury at auction and through private sales reached almost $1 billion in 2021, marking a strong rebound compared to previous years.Auction sales totaled a 73% increase over 2020.

Sales were led by the Sakura diamond in Hong Kong, weighing 15 carats, the largest purple pink diamond ever offered at auction..

Watches: The most expensive watch sold online in Dubai for USD $1,590,000; Christie’s sale in November in Geneva was 100% sold, highlighted by the first Rolex Deep Sea Special No. 1 Also in November, at Christie’s, more than 800 bidders and viewers participated in Geneva’s ONLY WATCH, the prestigious charity auction.

2021 highlights in Christie’s Americas include the Spring and Fall Marquee 20/21 sales, which proved to be a successful format that accurately predicted clients' tastes by offering diverse artists.

Christie’s Americas debuted a new hybrid salesroom in 2021, which hosted the return of in-person bidding in a global format.

The sale of Banksy's Game Changer for £16,758,000, the highest value work sold for charity this year at auction, with revenues to help healthcare in the UK, was one of the highlights for 2021 in London.

The enhanced global reach of Christie's Parisian auction room is reflected in the number of auctions held in 2021. By providing 24 private collections and a total of 7,340 pieces, the auction created a total of 62 new global auction records.

Highlights from 2021 in Asia: This year, the Hong Kong saleroom alone achieved a record for Christie's Asia's highest ever total achieved auction, this fall with combined sell-through rates of 90%, demonstrating market strength in Asia; Basquiat's Warrior became the most valuable western work ever offered in Asia

Christie's made its debut at Shanghai's China International Import EXPO (November) with the Radiance show, which featured 11 works by Basquiat and was held in conjunction with Shanghai Art Week.

When Christie's moves its Hong Kong offices to The Henderson, Zaha Hadid Architects' iconic and sustainably built tower in the city's luxury centre, it will open its first year-round saleroom and state-of-the-art gallery space in Asia in 2024. Christie's Shanghai office and galleries are relocating to BUND ONE this spring, with the first Shanghai sales taking place in March alongside those in London.

As a firm and via the art and objects we sell, Christie's is dedicated to achieving and maintaining a more equal and diversified reputation. This year, female artists set 66 records, while BIPOC artists set 47. The ongoing collaboration with 1-54 Contemporary African Art Fair has enabled us to support new artists through exhibitions hosted at Christie's galleries and an online platform for the fair on christies.com. Christie's new 20/21 department and nighttime sales format for art of the twentieth and twenty-first centuries, which debuted in May, has remained a forum for underrepresented artists. The auctioneer staff in the 20/21 category is now evenly split between male and female colleagues throughout all salerooms, including our marquee evening events.

Christie's, in collaboration with the Gallery Climate Coalition, staged a global series of philanthropic sales of works contributed by modern artists to benefit environmental charity ClientEarth in 2021, generating USD$6.1 million to date, with two more sales scheduled in 2022.