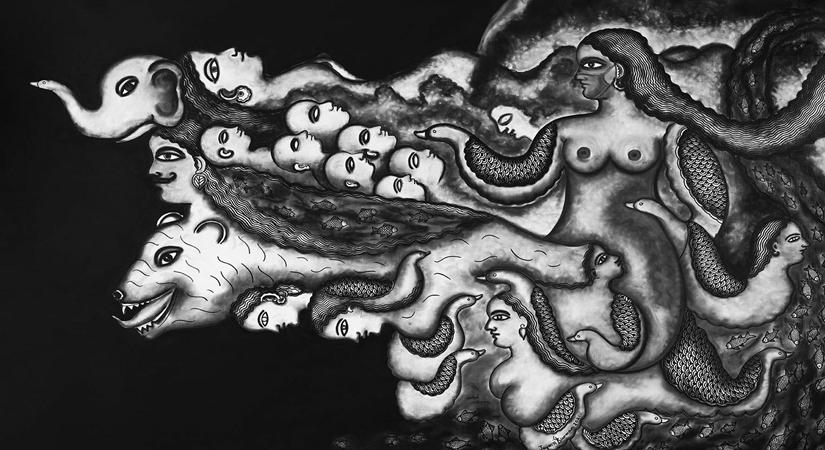 January 15, 2022 (IANSlife) She has vivid memories of going to the Ganga ghats in Kolkata every year. She might have been six or seven years old, but the subtle yet imposing images never left her---diyas on leaves moving gently with the river’s rhythm, men doing push-ups, shattered bangles being thrown in the water, people staring into nothingness, a group performing yoga poses. "The sheer theatre in Ganga’s embrace got imprinted in my mind. The river ceased to be just an element for me. It became greater than everything and consumed me. The excitement and awe towards it have only grown over the years, "says artist Jayasri Burman, whose latest exhibition "River of Faith" opened in the Capital recently and has now shifted to Gallery Art Exposure in Kolkata (till March 1).

This solo exhibition by Burman after more than a decade is an ode to the Ganga--a "subject" she has been working on since 2004. She says it is a way of reminding us to have faith in nature and its immense power. "We all saw how the bodies were dumped into the river during the peak of the second wave. The river took it all. Nothing altered its course, its purity, or the people's faith in her...Even in the most traumatic of times, she did not disappoint anyone, "she tells IANS.

Pointing towards the 84X216 canvas, she adds that if she could paint sound, she would try and capture the mystical notes of the river. But how does one express the many facets of the mighty river-its tranquillity, wilderness, movement, and immortality? "Ganga is how I attempt to compose the balance between its fluidity and the rootedness of the faith it evokes. In 2020 and 2021, in the pandemic gloom, I witnessed the abuse faced by Ganga on multiple occasions. Through my work, I wish to spread the message that it is a circle we all inhabit, and only if we nurture nature and not make her suffer, will humanity be able to live harmoniously, "says the artist, who has observed Ganga at various places she flows. 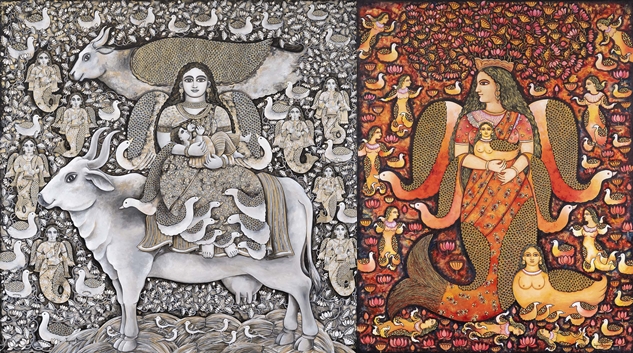 Talking about the huge sculptures in the exhibition, the artist says while it took multiple years to conceive of them, she spent a year putting them together. First made with clay, they were moulded in fibreglass and later put in a wax mould before the casting was done with bronze.

For someone whose work is not characterised by one particular style but is in fact an amalgamation of her numerous influences, she smiles and says that this has to do with the urge to learn constantly and evolve every day. How can one be a fulfilled artist? Every line I draw introduces me to a new facet of my skills and thought process. There is awe in every moment. Even a slight change in my life is reflected in my art. "

Talking about her fascination with mythology, she attributes it to the elaborate pujas and katha recitals at home when she was growing up. I would always wonder about the characters. Did those things really happen? Slowly, they seeped into my art in one form or another, "she remembers.

In these highly polarised times, when talking about mythology and Hindu Gods and symbols can easily get someone branded, Burman stresses, "I live in India, where every morning I wake up to my staff chanting. Dashboards on cars have idols of different Gods. I strongly believe everyone likes to visualise the "power" in the shape they like to see and derive the strength from it. I was born into a spiritually awakened family. "

And when it comes to the Ganga, Burman says that she is attracted to it both as a believer and as an artist. "In Benaras, I saw several foreigners doing the same rituals that we do. Many of them might not know the philosophy behind the ritual, but who are we to say that they were not drawing a certain peace from doing that? Belief works in different ways. As an artist, the colours, the many hues, different shapes of objects, the figures of people from varied walks of life and their expressions out there narrate a little storey to me. "