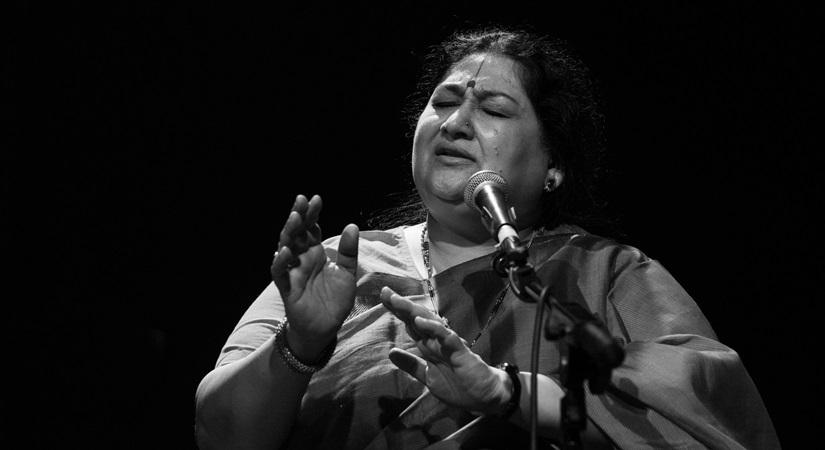 It has been drizzling for a few hours. It would have made perfect sense to start the conversation by showing off your Spotify account that has 'Ab Ke Sawan on the fourth number. But then, someone whose repertoire includes the genres of Khayal, Thumri and Dadra, as also popular Indian pop music may just laugh at the 'juvenile' icebreaker. The idea is dropped.

It makes all the sense to address Shubha Mudgal as singer and writer now. No, not just because she has written the witty and popular ï¿½Looking for Miss Sargam' (Speaking Tiger), a peek inside the world of classical music but also because she is writing another book on her experience with Indie-Pop.

The conversation doesn't follow a linear noteï¿½there is talk about festivals, and books on music and musicians that have hit the market in the recent pastï¿½ But getting back to ï¿½Looking for Miss Sargam', interestingly, it all started when Mudgal and her husband Aneesh Pradhan were working with theatre director Sunil Shanbag to put together a sequel to their earlier production ï¿½Stories in a Song'.

"I was looking for a more nuanced narrative for the sequel which boasted of more music and started sketching out the characters. Well, the production never happened. And the story kept sitting there. Then my husband suggested that I should show it to literary agent Kanishka Gupta. His response was quite enthusiastic, and the rest is history."

Spending more than three years writing and rewriting the manuscript, Mudgal feels that giving the reader's a bird's eye view of the classical world through her book has definitely enriched her. "The discipline of writing has enhanced my own articulation of the process of writing. Something I am grateful for. Though to shift from one medium to the other wasn't really easy, but I was helped by the fact that for over a decade, I wrote a column on music for a newspaper."

Insisting that one gets to see only the performance side of the classical world and not the grit and the grind, she adds, "I've seen both sides for a long time, that's why was drawn to sharing my experiences."

Talking about her next book, the singer, known for innovatively balancing the classical and Indi-pop world elaborates, "My experience with Indie pop which continues to be wonderful till date will form the basis of the next work. Even today, I get invited to sing tracks made by people younger than my son. It's wonderful to see how they understand and perceive music. It may be much different from the way we studied it, but at the same time, I like the interaction, and look forward to seeing their concerns --- what do they want to express, what is it that they are looking forward to? Also, as a singer, I learn a lot each time I sing on somebody else's trackï¿½ it's actually somebody else's baby getting my voice. You want that baby to sound like they would like, and you learn a lot in the process."

Mudgal believes it would be unfair to blame the Bollywood for snatching listeners away from other genres of music. "What is stopping people from asking for something more? Markets are driven by large business houses and their ability to advertise, but who is stopping Indians from asking for Bhajan, Kirtan, Qawali, Ghazal, Nazm and Indian classical music? The market will listen to them only if they ask for it, no? Even if you say that these are the genres that appeal only to the niche, but why do we forget that the niche in India will be far larger than anywhere else. And yes, technology has done disservice too. This whole idea of being able to listen free."

Firmly believing that the lack of arts education as part of the main curriculum in schools has adversely impacted the quality and quantity of listeners, she adds, "At no point am I saying that the arts education programme should only have classical music. What needs to be done is teaching the children to respect the arts and engage with them. Also, when we teach math and science in school, do we do that in order to ascertain that all of them become mathematicians or scientists? So, why do we expect that they would become artists after the introduction of such a course?"

Pointing that there was a need to properly plan and curate massive state sponsored music festivals, the singer says, "They are huge festivals organised at some of the most beautiful locations. We don't even get to know about the performers till the last moment? For example the Khajuraho dance festivalï¿½ There would be an ad in the papers two weeks before it starts, a time when the airfares would have skyrocketed."

Talk to her about how singles have rapidly replaced albums, and she is quick to assert that it has been an excellent development. "Very often in the past, the pressure to make an album was such that you worked well on one song and ended up doing an average job with others. Also, now, there are hardly any commissioned singers. Artists are investing their own resources. The cost of producing an album will turn out to be humongous. Thus, doing a single makes all the sense. An album can always be compiled later on, and this way, independent production becomes far easy to handle."

We decide to conclude the interaction with that. The drizzle hadn't stopped.