An open canvas: When a young woman goes public with art 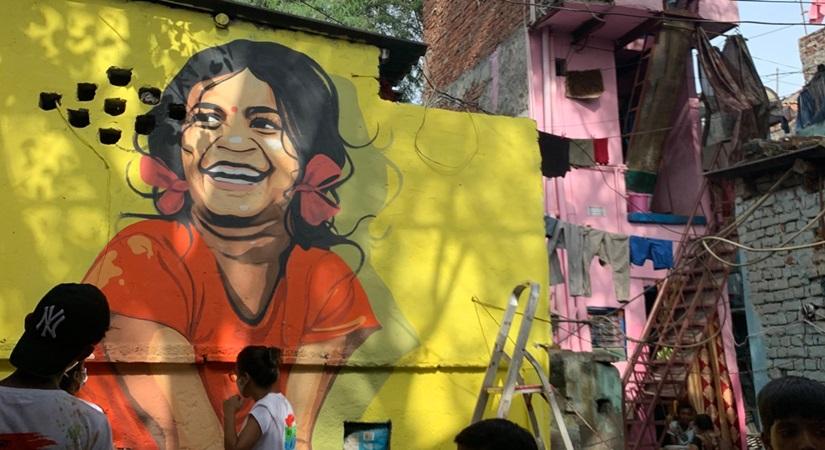 I think we have lost sight of what public art can be, says the artist

July 29, 2022 (IANSlife) For this 17-year-old, it all started at a government school in Sarojini Nagar. The school’s principal, who was going to retire wanted to leave behind something unique on the front wall. “When I heard about the opportunity through the NGO Each One Teach One, my head was abuzz with ideas. I spent the next week in a flurry of anticipation as I rallied to organize scaffolding, paint, rollers, hand sanitizers, and slingshots -- to scare away monkeys – and work with a college art student on a mural design,” remembers Anika Somaia, who founded ‘Open Canvas’, a Public Arts Project in 2019.

With the recently concluded ‘Sanjay Camp’ held last week where they worked the wall outside an urban slum in Delhi where Kailash Satyarthi Children’s Foundation (KSCF) runs its Bal Mitra Mandal (BMM) program, Somaia says that after her first project years ago she realized that public creation was not just a testament to the importance of creating beautiful things; but highlights the need for art to be liberated from behind gallery walls.

“So I sat down and reflected on what was compelling me towards mural creation, and I came to realize it was this idea of bringing art into public space and using it to uplift communities. That seemed to be the golden thread tying all these artworks together and it has since become the goal of Open Canvas.

It’s because of this that I’ve spent days navigating through long winding lanes in Delhi’s low-income neighborhoods, knocking on doors and asking for permission to create art on nearby walls – and it’s also why I’ve come up against reluctance at the start. Some residents will smile and shake their heads. Others have slammed their doors.”

Stressing that she has been noticing that more and more, visuals in our country's public spaces are limited to advertising, religious messaging, and political propaganda – rather than art, she adds, “At the same time, art in the formalized, institutionalized sense is often perceived as a sphere of high culture inaccessible to many. So yes, I think we have lost sight of what public art can be, and how it can transform communal spaces.”

Not limiting her work to the capital, one of their partners, ‘Each One Teach One', has ties with government agencies and schools in Mumbai, and that is where they are taking their murals next. “I am also in the process of recruiting a team of core volunteers who will then be able to execute more projects, specifical murals in other states,” she says.

Looking forward to establishing more partnerships, particularly with government agencies and paint companies as this would enable Open Canvas to secure more sites and expand its output.

“And through the existing links we have with art galleries, I want to reach out to India’s celebrated artists and collaborate on bringing their art into the public sphere, whether it be through murals on a prominent wall or sculptures in a public building,” she concludes.