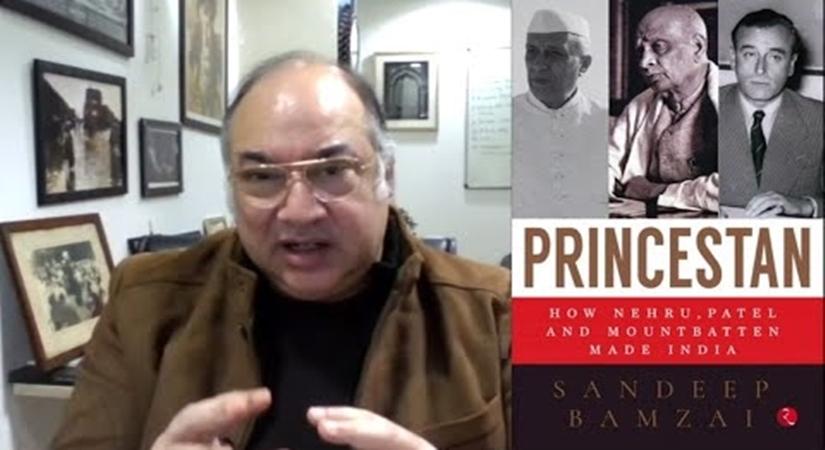 The session took place with moderator Pallavi Rebbapragada, a journalist.

Beginning with the session, Pallavi said, "Gandhi in 2nd round table conference told that 'You shouldn't toe the British line and you should make Independence easier for the country'. Gandhiji never wanted any sort of revolt from any section of the society. His methods were more towards assimilating whether the princely states or the different castes or Hindus and Muslims together in one battle."

In response to this, Bamzai quoted, "This was how Princestan was formed. How a section of diabolical princes actually to a large extent managed to stay out of the ambiente of Hindustan and Pakistan till brought to heal by Pandit Nehru, Sardar Patel and Lord Mountbatten in what I believed was a relay run. The princes never wanted independence."

He further continued with, "The Nizam of Hyderabad convinced the British to be called His Exalted Highness. In Unified India, you couldn't merely have the princely states who were outside the ambiente, it included all 565 princely states. The princes together representing the British Monarchy in India actually had something called Narender Mandal which was the chamber of princes and the Chancellor of the Chamber of Princes was the Nawab of Bhopal Hamidullah Khan."

"Mountbatten lambasted the princes and told them that you have to sign a standstill agreement with either India or Pakistan as the Dominion is formed. There was a record which says that says Princes and particularly the Nawab of Bhopal has been sold out by the decoloniser called Mountbatten."

Bamzai added, "The Narender Mandal or the Chamber of Princes is called the Bastard child of Montague-Chelmsford reforms and INC never believed in it".

Bamzai said according to his theory, Gandhiji was not ambivalent to the princes like Nehru, Patel and some of the other congress leaders. Nehru always lambasted and fulminated against the princes. The fact that he was antimonarchial from the beginning. Nehru never ever liked the princes and this stems out of his anti-monarchial and Fabian socialist thinking, Bamzai said.

"Organization of All India States conference is Nehru's creation. Nehru threw down the gauntlet at Gandhiji and said we have to ensure that Princely States with the rest of the Union of India. Princes were virulent organisms. They didn't understand anything, but themselves. They were totally power drunk. Nehru's upbringing, his thought process was constantly evolving and it was always antimonarchial," Bamzai said.

"But, the princes were at a different zone. The Thakur of Rajkot allowed Gandhiji to sit on his throne whenever Gandhiji came to Rajkot. But when talk of freedom, democracy happened, Gandhiji tried his level best to shake this man, but he refused to accept it. There was this movement where Congress using the AISP as the stocking horse tried their level best to undertake reforms. There were dialogues with various princes at various times and in most cases the princes always won till Mountbatten lashed out at them and told them that there's no other way if you were thinking post August 15 you would create your little empire and British are going to support you. That's where Princestan comes in. Gandhiji was very favourably inclined to the princes", Bamzai said.

He goes on to comment that the Thakur of Rajkot did not budge when talks about democracy were pushed. "Gandhiji believed in an Amorphous India. He wanted people to coexist. Patel asked "will Mountbatten bring all 565 apples in a basket and place it to him?"

Bamzai said VP Menon is a hard nosed tough bureaucrat who had worked with Mountbatten earlier. He travelled endlessly from Odisha to Bhavnagar.

"Patel was smart enough to understand there is this guy who could deliver the basket of apples he was promised. Menon goes to Shimla, works on Dicky Bird plan, ratifies the plan from Nehru, approves the plan from Mountbatten. Menon then calls Patel and explains to them how Nehru and Mountbatten have gone beyond the Dicky Bird plan and they have a new plan that both have approved. Patel asked him are you happy with the contours of what you see. Menon answers with the affirmative to Patel and Patel gives thumbs up and that is how India is created," Bamzai adds.

He says at all times in the run up to the independence of India, Nehru, Patel and Mountbatten play a crucial role.

"Churchill is calling Wavell to his office before he's ousted in the election and telling him to make sure that we keep a bit of India. That conspiracy is Princestan," Bamzai ends.