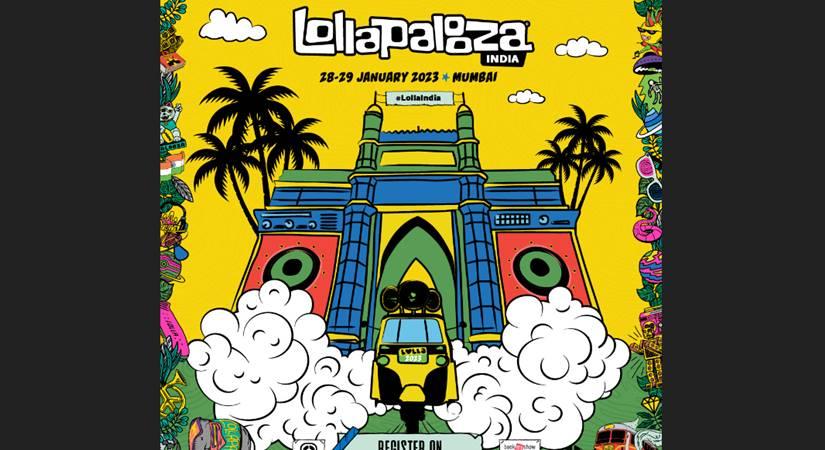 Lollapalooza India is a two-day musical extravaganza to be held in Mumbai on January 28th-29th, 2023

August 2, 2022 (IANSlife) Iconic music festival Lollapalooza sets to breach a new frontier in what will be the eighth destination of the festival in Mumbai, India, bringing with it - its brand of unique, diverse and exciting flavours from the world of music. With the inaugural, first-ever edition in Asia, Lollapalooza finally brings its multi-genre music experience to Indian shores, with a world-class experience that’s never been seen before in the subcontinent.

BookMyShow, will spearhead Lollapalooza India as the promoter and co-producer for the festival’s Indian edition along with global producers, Perry Farrell, WME and C3 Presents.

Over three decades of pioneering and putting alternative culture on the map, Lollapalooza is a force, amongst the foremost music festivals that have been celebrated by multiple generations of fans. Founder of the festival and Jane’s Addiction front man Perry Farrell was always ahead of the times, creating a sound for the alternative generation that came of age in the 1990s. After some great success in his early career, his band was headed for a brief hiatus with a farewell festival tour in July 1991 which soon became the global iconic platform destined to change the landscape of live music forever.

31 years later, itis globally synonymous with alternative lifestyle, music and culture. It has travelled the world, with seven locations across three continents that annually host the event. Everyone feels at home here, a festival that celebrates the culture of music, with inclusivity and unique experiences at the centre of it.

Following many years as a touring festival, the festival found its home in Chicago, U.S.A, and has grown to include annual editions across various culturally-rich countries including Chile, Brazil, Argentina, Germany, France and Sweden with more than 66 editions of the festival so far, before it comes to India in 2023.

Amongst the biggest globally, this multi-genre music festival carries the legacy of having changed the course of alternative-rock music on the global stage. From introducing genre-defining acts and artists to the world, making them household names, Lollapalooza is a melting pot of myriad genres comprising pop, rock, metal, punk rock and hip-hop as well as indie, Electronic Dance Music (EDM) and techno.

Following a philosophy of ‘Mix the music, generations, Reunite the most advanced music experts and a Neophyte public’, Lollapalooza India aims to bring together music aficionados across genres, entertainment enthusiasts, global and Indian audiences that are seeking marquee, unique experiences at par with international standards. Amongst the boldest, brightest, most colourful and diverse festivals around the world, it is a festival that offers everyone something to take back home through its music, ethos, vibe and unparalleled experience.

The inaugural Lollapalooza India will be open to over 60,000 fans each day and will be a treat for Indians and Asians all across. Featuring four stages with over 20 hours of unforgettable live music performed by some of the biggest names globally and locally, the festival is truly an experience of a lifetime with innovative culinary selections, art, fashion and much more to be witnessed in India.

“The music of India is transcendental, it draws our spirits East,” said Perry Farrell, Founder, Lollapalooza, ahead of the festival’s first India edition. “Lollapalooza is an instrument for unity, peace, and education utilizing the universal languages of music and art to find common ground. You may be excited, and we are equally as excited!”

Limited Early Bird tickets for pre-registered users go live on August 1st, 2022. Early Bird tickets for Lollapalooza India’s first ever edition start Rs7,000/- onwards. The star-studded artist line-up for the first-ever India edition of the coveted festival will be announced later this year. Registrations for Lollapalooza India will be live on lollaindia.com starting today, July 27th until July 31st. Fans can register themselves for this musical extravaganza right now!