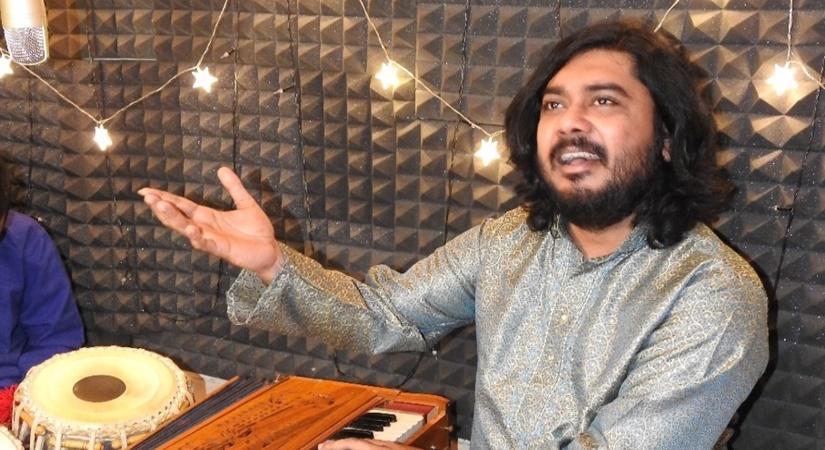 Believing that musicians should expose themselves to all forms of music, irrespective of language, techniques and borders, he feels that doing so ascertains a broader approach towards the art form and of course, wider knowledge

September 27, 2021 (IANSlife) Believing that musicians should expose themselves to all forms of music, irrespective of language, techniques and borders, he feels that doing so ascertains a broader approach towards the art form and of course, wider knowledge.

Hindustani Classical vocalist Nadeem Khan, hailing from the reputed Rampur-Sehaswan Gharana, who collaborated with London-based flautist Katrina Fountain for the album ‘Aghaaz’ remembers, “It was a milestone in my musical journey. I will always be grateful to her for the project as it gave me exposure to western music and its techniques. I learnt a lot from this collaboration, it was an unforgettable experience,” he tells IANS.

Born in a family of Indian classical vocalists, this exponent of Khayal gayaki, who was introduced to music by his maternal grandfather, Ustad Sarfaraz Husain Khan and received guidance from his older cousin Ustad Rashid Khan, the vocalist says he lucky to be in an environment surrounded by music. “Though this helped develop a deep interest and fascination for music, I must stress that one needs to have natural talent too. I always believe that any legacy is not someone’s paternal property without having the ability and determination to inherit it deservingly.”

Khan says that there are multiple reasons for his fascination with Khayal gayaki -- the emotions with which one elaborates a handful of notes into a rendition along with expressions and certain embellishments that justify the literal sense of composition. “This is just like painting a beautiful portrait on canvas. Besides this, it has very strong technical elements that can help enhance and hone their tonal quality and voice production.”

Among the forms like Tarana, Thumri, Bhajan, Ghazal and Sufi -- which he commands, Khan refuses to point out his favourite. “I am someone who believes in being versatile and all these forms boast of beauty, attraction and grace in their respective styles. It will not be fair to compare them too. I feel it is a blessing to be able to present every form with equal ease and command,” he smiles.

Interestingly, the classical singer also has a band ‘Aayat’, which he started with his younger brother Rizwan Khan. Back in 2012, after working on the ‘Aghaaz’ album, he started jamming with several western musicians and even gave vocals for a record label Misbah Records for a fusion number ‘Mast Qalandar’, from the album Sufi Jhoom that featured A.Hariharan and Ustad Raees Khan. “This is where I started liking the whole concept of fusing Indian Classical vocals with western music progression, and the idea got transformed into practicality in the form of the band.”

Ask him about the reaction from purists when it comes to fusion, and the classical vocalist asserts that since fusion music has been influencing people for quite a few years now including major artists like Pandit Ravi Shankar and Ustad Zakir Hussain, the Indian classical music scenario has accepted it too much extent. “ Purists and critics now expect fusion to be more musical and sensible, and not confusing.”

Khan, who was recently part of HCL Concerts’ ‘Baithak’ feels that it is high time that more corporates step forward to support the arts. “ I really wish that other foundations and corporates come forward to promote our rich cultural heritage.”

Though he has been missing live performances, the artist says that digital concerts have helped the artist fraternity to keep sharing and has even given much exposure to many artists. “But of course, we all are looking forward to performing live and experiences that come from travelling to different places, meeting new people and encountering new cultures. Not to forget the warmth of a live audience.”