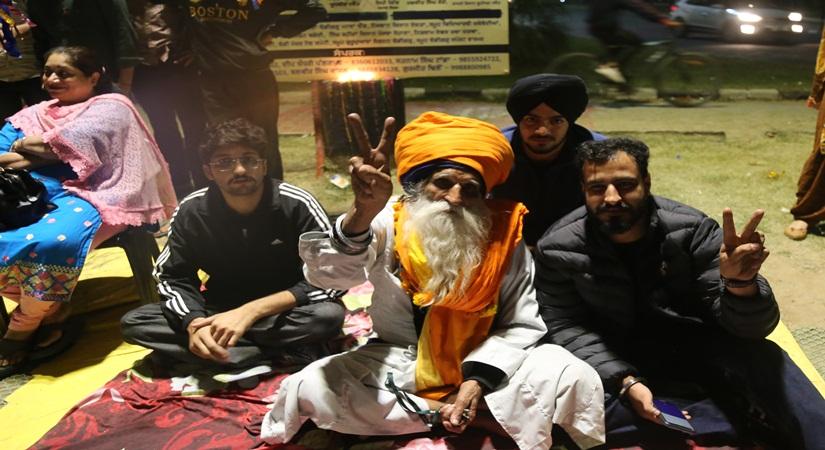 Not just activists, but students and citizens came out in large numbers till late evening, lighted candles, and ensured that the very Punjabi form of celebration—the dhol—was not missed

Chandigarh, November 21 (IANSlife) The roundabout has been his home for 10 months now. The routine has never altered--waking up before dawn, sipping tea with the daily wage labourers, and leaving his tent, parked close to the famous "Matka" chowk, to stand with the farmers’ flag and wave at the vehicles that pass-by. Labh Singh’s (82) presence is acknowledged by honking. Those who don’t get a frown. And yes, Google Maps identifies the roundabout as "Baba Labh Singh Chowk."

The announcement of the three farm laws being repealed on Friday morning meant a spontaneous mela at the protest site. Not just activists, but students and citizens who came out in large numbers to stand with him till late evening, lighted candles, ensured that the very Punjabi form of celebration—the dhol—was not missed. From selfies, victory signs to sloganeering, the day belonged to Babaji, as he is fondly addressed, who this January started the campaign-"Har chowk kisan ke saath, Har light kisan ke saath".

But he is in no mood to stop the protest. This is a great day for us, and we have the Gurus to thank for it. It's Gurpurab, and I must acknowledge all the support that has come from this city’s residents. Despite the extreme weather, they stood with me. No pressure from the state held them back. Although I am happy with the announcement made by PM Modi today, I am not leaving this place until the bill is passed in Parliament and the MSP is fixed, "he tells IANS.

Gurnam Singh, a Panjab University (Chandigarh) student, who, along with his friends, has been coming to sit with Labh Singh for months now, feels that his constant presence has been instrumental in encouraging many city residents to come to the protest site every evening. Although the turnout has been massive today, on other days too, many people, from all groups and genders, would make it a point to stand with him for some time. It would be foolish to underestimate the effect an 82-year-old living alone in the same place for a cause can have on people who see him every day. I was also part of the CAA protests, but I have yet to come across an example where one man has managed to make a point so strongly, "he said.

In fact, several major farmer leaders, including Rakesh Tikait, also visited him a few months back. Not just the roundabout, small batches of tractors could be seen on roads across the Tricity—Chandigarh, Mohali, and Panchkula.

Avantika Bahar, a research scholar who frequently comes to the roundabout to stand with Labh Singh, feels that Singh has managed to ignite a "dying" sense of protest. Let’s face it, this is a rich and cold city, compartmentalised in every way. What he has managed to do is bring everyone to the same level, which I feel is the biggest achievement. He has proven that protest can go beyond long speeches and violence, that it is a quiet strength that matters.