Leopard rescue in Amroha, UP 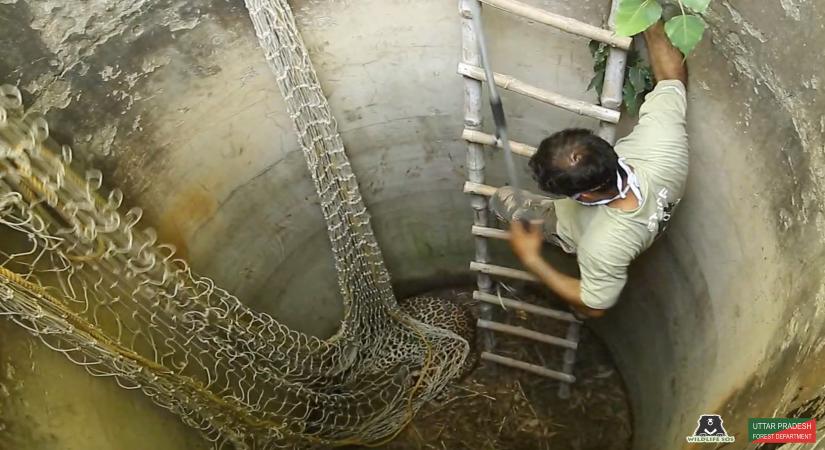 May 29, 2020 (IANSlife) A wild leopard escaped a narrow brush with death after falling into a deep village well in Amroha, Uttar Pradesh, located about 80 miles from the National Capital.

The Leopard was rescued by a Wildlife SOS Rapid Response Unit and the Uttar Pradesh Forest Department. The cat survived the fall and is under treatment and observation.

The Wildlife SOS team received an emergency call from the Forest Department about a leopard that had fallen into a deep well and suspected to have injuries. An eight member team from the Rapid Response Unit rushed to Amroha in two vehicles to assist the Forest Department. The rescue equipment included safety nets, tranquillizer equipment, blow pipes and protective gear. Meanwhile, the leopard had been inside the well for over eight hours and was both exhausted and dehydrated from the heat and needed urgent medical attention.

The forest officers and police personnel had cordoned off the area to keep curious onlookers away at a safe distance. Dr.S.Ilayaraja - Deputy Director Wildlife SOS Veterinary Division and Dr Pritam - Senior Veterinarian from the Wildlife SOS Agra Rescue Center tranquilized and immobilised the leopard using a sedative injection from a safe distance. Members of the Wildlife SOS Rescue crew then climbed down into the deep well to safely extricate the then sleeping leopard out of the well.

The leopard was given a medical examination by the Veterinary team and then transported to the Forest Range Office in a transport cage. Once the animal had recovered from the sedative, it was then shifted in a convoy to the Animal Hospital in the Etawah Safari for treatment and observation.

Shri Sunil Pandey, IFS - Chief Wildlife Warden of Uttar Pradesh said, “We have observed that there is a significant leopard population inhabiting the river banks of Ganga and Yamuna in the past 6-12 months. As there are agricultural lands in the vicinity, leopards often venture out into these areas in search of easily available prey such as poultry and livestock.”

Dr. S. Ilayaraja, Deputy Director - Veterinary Services, Wildlife SOS, said, “The leopard was suffering from severe dehydration and needed oral rehydration solution and IV drips. The animal is unable to bear weight on its hind legs and will require continuous treatment and observation.”

Lalit Verma, Chief Conservator of Forest (CCF) Meerut said, “The entire operation was carried out efficiently and we are glad that the leopard is safe and under treatment at Etawah.”

Baiju Raj M.V, Director Conservation Projects, Wildlife SOS said, “Last month, we assisted the Forest Dept in rescuing a leopard sighted just 40 miles from the Taj Mahal near some temples! Leopards are protected by Indian law and listed under schedule 1 of the Wildlife Protection Act 1972.”