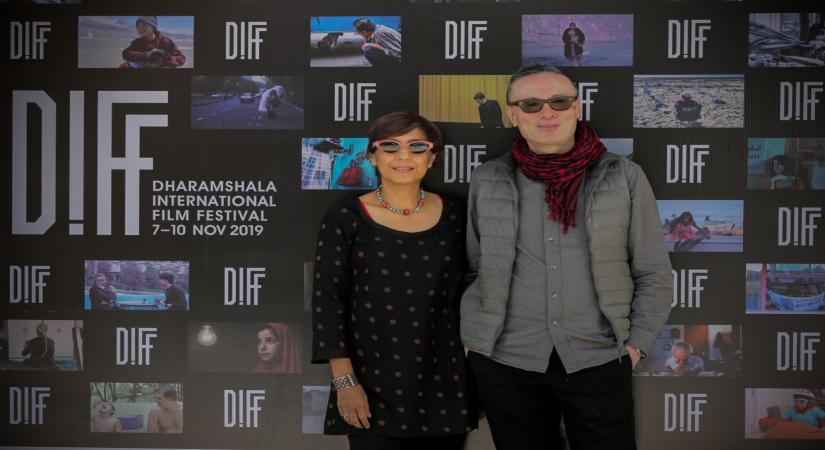 May 30, 2020 (IANSlife) Every year in winters, the small town of McLeod Ganj, also known as 'Little Lhasa', engulfed by the Dhauladhar mountain range comes alive with filmmakers and viewers from across the globe coming in to soak different tales during a festival ruled by cinematic narratives and not celebrities, entertainment or distribution agents.

As long term residents of Dharamshala, when Ritu Sarin and Tenzing Sonam started the Dharamshala International Film festival (DIFF) in the year 2012, the idea was to create a space that would provide the local communities an opportunity to watch independent films from India and around the world besides using the platform as a catalyst to develop cinema culture and encourage local filmmaking in the Indian Himalayan regions.

However, the duo had no idea that over the years, the festival would attract audiences from around the country. There was obviously a shortage of truly independent film festivals in the country and DIFF filled that gap. Over the years, many international and India's finest independent filmmakers have come to the festival and shown their films here. "As filmmakers ourselves, we understand how challenging it is for indie filmmakers to make their films and have them shown on the big screen. It's been a great pleasure for us to be able to aid this process in a small way. Being filmmaker centric, the festival has gained a reputation for being the place for Indian indie filmmakers to come and show their films," says Ritu.

While the dates for this year's festival stand at October 29 to November 1, the duo are hopeful of holding the festival, but will take a final call in August. "It will depend on where we are with the pandemic, whether it is safe for people to gather in groups, and whether people will even be prepared to come so soon after such a major disruption in our lives. Many film festivals around the world have gone online, and that is an option we are considering. An online festival maybe fine for one year, but it is definitely no real substitute for the energy of the real thing," adds Tenzing.

Meanwhile, launching the ‘DIFF Viewing Room' as a response to the Covid-19 lockdown a month back has been received quite well by film buffs across the country and abroad. Ritu elaborates, "Making available films from previous editions of the festival for free viewing seemed like the best thing we could do. We reached out to the filmmakers who had participated in DIFF and received a positive response. The viewers' response and feedback has been equally astonishing."

Adding that when even at the best of times, government support in terms of funding for independent cultural events is minimal, one could not expect much during a crisis like this, Tenzing says, "It is difficult to see the government prioritising such events for support. However, we really hope there is a new generation of bureaucrats and politicians out there who think otherwise and can make the difference."

With a number of projects on the boil, including a new feature film, the duo, while continuing work on their ongoing archival project, 'Shadow Circus', which will be shown in Europe once travel is possible, add that holding DIFF in McLeod Ganj which does not have a cinema hall, is always a logistical challenge. "We have to hire equipment from Delhi and convert available spaces into movie theatres. Over time, we have become more experienced, and have been able to upgrade our projection facilities. However, our main challenge from the beginning has been funding. In a small town like Dharamshala, it is extremely challenging to attract corporate sponsorship despite being considered one of the best film festivals in India," says Tenzing.

Talk to them about support from the Himachal Pradesh government as the festival attracts both domestic and international tourists, and Ritu adds,"The Himachal government has been supportive from the beginning, especially in terms of logistical support at the local level, but being a small state, has only provided very limited funding. Even that has now stopped. Unless the local government places a high value in cinema and arts, we fear in the post Covid world, the situation will not improve. Our festival is run by a small team that comes together about three months before the festival takes place and then disbands soon afterwards. Every year, we have to start looking for funds for the next edition and this uncertainty and instability impacts the scope of what we can do."